Obesity has fast become the leading cause of major health problems like diabetes, heart disease and certain cancers.(1) Around 1 in 4 adults in the UK are now considered to be obese.(2)

Diet, inactivity, genetics and metabolic factors all contribute to the development of obesity. However, recent research has highlighted the crucial role that our gut microbiome plays in determining how much we weigh and why weight loss may be difficult – even after bariatric surgery.

There are billions upon billions of bacteria in the gut, but their accumulated mass is only around 0.2kg.(3) Rather, their contribution to weight comes from the products of their metabolism. Bacteria in our distal gut, or colon, are experts at extracting energy from indigestible dietary polysaccharides, i.e. fibre. So much so, that 10% of our daily caloric intake comes from their metabolic by-products.(4) These products are known as short-chain fatty acids (SCFAs), namely acetate, propionate, and butyrate, as well as other organic acids like formate. Additional products of bacterial fermentation include gases such as hydrogen and methane, but the latter is gaining notoriety for its role in obesity.

In the human gut, methane is produced almost exclusively by archaea and the most abundant species is Methanobrevibacter smithii.(5) These microorganisms are more closely related to us than bacteria.(6) Although, archaea form a syntrophic relationship with intestinal bacteria whereby they benefit each other. Methanogens are non-saccharolytic, which means they do not break down carbohydrates for energy. Instead, saccharolytic bacteria break down carbohydrates to produce SCFAs and hydrogen gas. The archaea then harvest the hydrogen and the SCFAs acetate and formate to produce methane, which in turn, improves the metabolism efficiency of bacteria.(7)

Research has found that the presence of M. smithii increases the population size of common gut bacteria called Bacteroides as well as their capacity to break down fructans.(8) Therefore facilitating SCFA production and enhancing the availability of calories to the host. SCFAs are transported from the distal gut to the liver, via the portal vein, where they stimulate de novo lipogenesis (conversion of carbohydrates to fat). The same animal study found that lipogenesis was accompanied by an increased storage of energy in fat cells.(8)

Fructans are short-chain carbohydrates found in many popular foods like wheat, barley, garlic and onions. They belong to a group of carbohydrates called FODMAPS (Fermentable Oligo-, Di-, Mono-saccharides and Polyols). Methane production enhances our ability to convert these carbs into fat. It is likely this relationship was beneficial to us in times of famine, by harvesting essential calories from indigestible plant carbohydrates. What was once an advantage may now be a burden when food is always readily available to us. 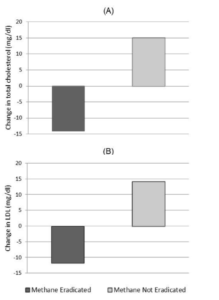 Figure 1: Eradication of breath methane with Rifaximin and Neomycin is associated with improvements in total cholesterol (A) and LDL (B).(11)

The idea that colonisation by M. smithii leads to weight gain has been established in humans. The presence of methane, detected in breath, is associated with an increased body mass index (BMI) and total body fat percentage.(9,10) A study by Mathur and colleagues found that eradicating methane with antibiotics in obese patients lead to beneficial effects on several metabolic parameters: it reduced total cholesterol and LDL, or “bad” cholesterol; it improved insulin and blood glucose levels, and reduced symptoms of bloating.(11) In addition, there were significantly reduced numbers of M. smithii in stool after taking the antibiotics, a combination of Rifaximin and Neomycin.

One study went on to look at obese patients undertaking weight loss surgery. Those patients with a positive hydrogen and methane breath test experienced the least weight loss and lowest reduction in BMI following bariatric surgery.(12)

Whilst the association between methane and obesity is somewhat new to us, the intimate relationship between methane and constipation has been well documented. Methane has been shown to directly slow down transit time through the small bowel.(13) The small intestine is where the absorption of most digested nutrients takes place. It has been postulated that methane slows down the time it takes for food to pass through the small bowel, allowing for elevated absorption of nutrients and calories.

Hydrogen and methane breath tests are a simple and widely accepted means of identifying changes to the gut microbiome, such as small intestinal bacterial overgrowth (SIBO) or excessive methane production. Excessive methane levels detected in breath have been associated with symptoms of bloating, belching and constipation – now a link has been established between methane and obesity.

The gut is not just home to bacteria but a variety of metabolic hormones, which also influence weight. The hormone‐secreting cells located in the gut are part of the enteroendocrine system. This includes the incretin hormone glucagon-like peptide 1 (GLP-1), which is secreted from L cells in the distal gut following a meal. This leads to a release of insulin and a reduction in appetite. GLP‐1 has been shown to have therapeutic benefits in the treatment of both obesity and type 2 diabetes through appetite suppression and improved blood glucose control, respectively. However, methanogens are also found near these GLP-1 producing L-cells in the distal gut, and one recent study showed there is a positive correlation between methane production and GLP‐1 secretion.(14) Furthermore, GLP‐1 levels are higher in obese non-diabetics vs obese diabetics.(15) This suggests that methane may be protective against the development of type 2 diabetes in obesity, due to an enhanced GLP‐1 secretion response. Although, the study highlighted this benefit was only seen at physiological levels of methane, which is breath methane levels of around 10ppm in humans.(16) Excessive methane production did not impact on GLP-1 secretion.

There is still much to be discovered regarding the intricate relationship between the gut microbiome and human health, but we now understand how bacteria can influence our weight and metabolism. Breath testing may therefore be a useful tool in the identification of individuals prior to weight loss surgery, as those with elevated breath methane could benefit from dietary and/or pharmacological interventions to help them achieve their weight loss goals.

4. McNeil NI. The contribution of the large intestine to energy supplies in man. The American journal of clinical nutrition. 1984;39:338-342.